NL Urban Solutions (NLUS), in cooperation with GVL (Guangzhou), won second prize for the concept landscape design of the new city: Academician Valley. They were selected, together with three other American and Chinese companies, from 26 applications worldwide. The city, with planned area of 21.7 km2 and a population of a half million people will become the center area and ‘economic engine’ of Jinghe New City, Xi’an, Shaan Xi Province, China.

The jury praised NLUS for their ecological, resilient approach, and creative design concept. Storm water management and ecological measures were well integrated with the landscape design. “With the ambitious goal ‘to become the best ecological environment, attract the most outstanding talents and gather the strongest high-end industries, NLUS created conditions for a green, livable and healthy city”, says one of the jury members. NLUS  believes that the nature based and people oriented public space and landscape design plays a significant role in attracting future talents.

“In our concept design we proposed the comprehensive blue green network with different scales (XL-great ecological corridors, L-water system, M-green streets, S-community green and green buildings). The complete green-blue system can make a green city as well as a resilient city that is adaptive in different climate conditions. In the detailed landscape design, we proposed a park area, where the water channel becomes a natural river with soft banks, wetlands, islands and gullies. The design is a basis for diverse bio-habitats for local flora and fauna. The flooding safety is combined with ecological recovery and spatial quality. The slow traffic paths are designed to provide safe and connected routes. In the center, green roofs on top of the commercial buildings were designed to function as extension of the green public space. We chose to introduce organic language for the landscape design, to emphasize the contrast with the grid layout of the urban design.” 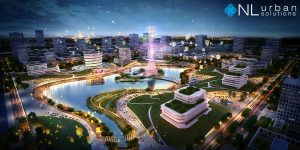